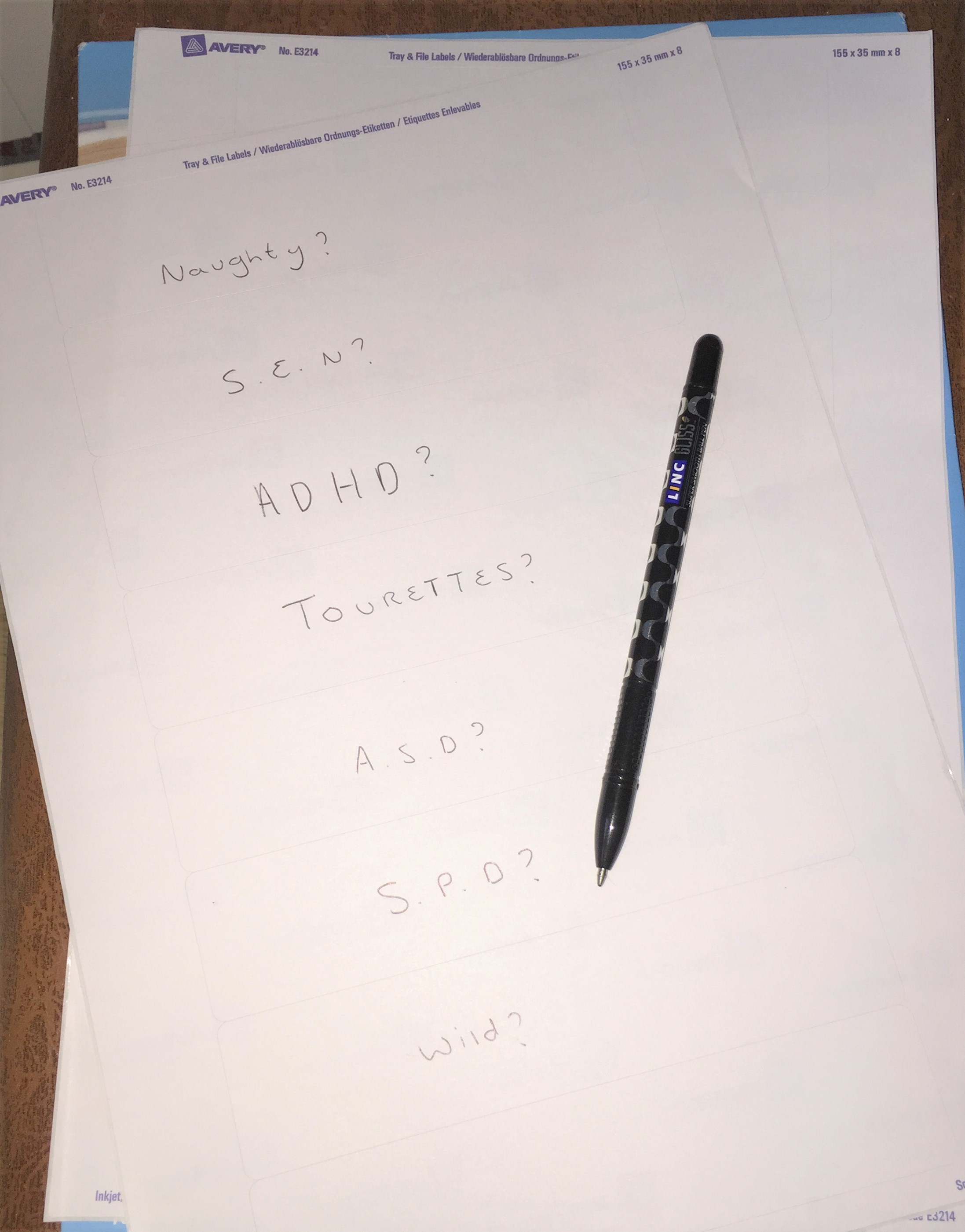 “Labelling” your child is a controversial subject with a lot of people feeling strongly about it.  We recently attended a talk on ADHD and the subject came up of why people feel the need to have a label.

We have always wanted a “label” for George, let me explain why we felt this was important.

Before George had a Tourette’s diagnosis he had no medical diagnosis to explain his difficulties and why he does the things he does. As a toddler out and about at toddler groups he would be very hard work, not conforming to standards of behaviour expected of him. We knew there was something not quite right but with no medical professional recognising this we were left to try and explain his behaviour to others. This is very hard without a name, people then tended to give him their own labels such as “naughty”, “out of control”, “wild”, “undisciplined”, “spoilt”, “rough”, “aggressive”, “spiteful”, “strange”. As a parent these things are hard to hear, to a young child growing up hearing these things must have been soul destroying. George learnt early on, he didn’t get invited to birthday parties or play dates, people declined invitations to his parties. This is simply because people don’t make allowances for the above labels, he was the child you told your child not to play with in case his behaviour rubbed off on them.

As a parent my confidence was destroyed by years of being told by medical professionals there wasn’t anything wrong with him, we just needed to work on our parenting techniques.

There aren’t many books or support groups for children with difficulties with no diagnosis, so we were alone and feeling very judged.

When we finally had a diagnosis after years of the above it was a huge relief. We could access support networks, read books about Tourette’s, explain to people about George, everything was so different.  I often wonder what George’s early years would have been like had he been diagnosed at the start?

People’s attitude changes when you have a diagnosis, instead of telling their children to avoid your “naughty” child, they explain to them George has Tourette’s and sometimes finds things difficult.

For us George being labelled as having Tourette’s meant:
Acceptance
Understanding
Support
Targeted support at school
Reduced the unhelpful negative labels people gave him.

Labels don’t have to be a negative thing, they don’t define a child.  In our case it allows George to be himself without judgement.

At the moment George has a lot of other difficulties that aren’t covered by the Tourette’s label. This has proved to be a problem when converting his statement to an Education, Health and Care plan (EHCP). We are now in the process of having his other needs re-assessed and if necessary he will have additional labels. We hope if this is the case it will free him and allow more doors to open.