Yesterday was the day people with hidden disabilities had long awaited, applications for Blue Badges were open to those with non-physical disabilities in England. Previously it was up to individual councils whether or not they would accept these applications.

Whilst this is a positive move for those that will benefit , it also brought a lot of bitter and ignorant social media posts from those that think people with hidden disabilities shouldn’t receive this adjustment.

I am not going to debate that particular argument now as there are many posts out there already defending the people that will now rightly qualify for a badge and the reasons why.

It was whilst I was debating the reasons badges were needed for hidden disabilities it dawned on me how much is hidden not only from the public, but even close family and friends.

At first glance nobody would have any inkling that our home life was anything other than a normal family set up. I flood my private social media accounts with hundreds of photos, as a back up and diary more than anything. Happy, fun summer holidays, days out, picnics, parks, beaches everything you do with kids in summer. At school Faye is liked by her teachers is helpful and well behaved to the extent they have doubts of her diagnosis.

Faye masks as a lot of girls on the spectrum do, she is able to mimic well. At school she is able to observe and copy her peers and when she comes home she can pull off the tone and mannerisms of her teachers without knowing she is doing it. The sad thing is, fitting in at school is exhausting, confusing and upsetting for Faye. When she says she is looking forward to going back to school to do more writing but she is worried about having to “act normal” it breaks my heart. Faye doesn’t get the adjustments she needs because she exhausts herself trying to be like everyone else.  Faye has her own you tube channel talking about sensory toys, chews and other things that help her. She comes across like the millions of other children on YouTube thinking they will become famous, no hint that she is in any way different from other 8 year olds. In fact, Faye seems very much like the other girls she watches on YouTube because she is copying their style, their tone, their posture very little of what goes into the videos is the real Faye.

George tries to hide everything about Tourette’s and Autism, he struggles to supress his tics at school so when he gets home his tics are so bad he can’t even speak.

We all know the analogy of the child with ASD or ADHD acting like a coke bottle at school, every thing they have to deal with, hide or manage shaking them up little by little, until they come home and they are so shaken the top explodes off. This is true every single day for George and Faye. Before school trying to get ready and the moment they leave the classroom is full on meltdowns. But unless you are one of my unfortunate neighbours or are one of the kind people that live near the school that accuse me of child abuse due to the daily screaming you won’t see anything other than a child fitting in at school.

Looking at my social media posts there is no hint of the issues we have faced during those days out, the happy faces eating ice cream don’t show the hitting, shouting, rolling on the floor, running off, hiding, meltdowns, the child chewing my handbag strap because she has lost her Chewigem, throwing things in a restaurant and trying to run across the busy car park because they have changed the menu and they cannot simply choose something else. You don’t see the planning and preparation that goes into leaving the house. We can’t simply pop to the shop or go to the park on the spur of the moment, they simply cannot cope with the unexpected.

Social media shows what a close knit extended family we have, unless you look closely you won’t notice that I isolate myself and make excuses not to meet with other Mum friends, I don’t socialise myself at all anymore as I don’t want to have to struggle with my children in front of other parents and don’t want to put my children through meltdowns in front of their friends. It wasn’t something I chose to do but something that has happened gradually over the years. The other reason we are rarely out without other family present is because we usually need extra adults on hand, last minute days out are not often possible as we need extra family support to manage them.

There are dozens of photos of George with us over the summer, they don’t show the bribery taken to get a photo of him, they don’t show the reason there are so many photos of him with us is because he isn’t like the rest of his 13 year old peers, he cannot go out alone and doesn’t get invited anywhere even if he could. He is lonely but still doesn’t understand why he doesn’t quite fit in with his friends. Photos might not be able to hide the fact he is 2 stone heavier than me and now towers over me, they are more than a reminder of how fast he has grown up though they are a reminder I can no longer physically remove him from harm or calm him by picking him up and taking him somewhere else, which means he is more of a risk to himself and others than when he was small.

I get frustrated sometimes that the help George and Faye need isn’t forthcoming because they mask, but am I just as guilty by keeping their struggles hidden? Does it help showing the world what a typical family we are on social media, protecting the kids privacy by not talking about the ugly side of Autism and keeping everything positive?

Are positive Autism slogans enough to raise awareness? Is this masking and positive spin doctoring we do as parents part of the reason people don’t understand and why there is so much confusion about why people without physical disabilities can now apply for a blue badge?

If I do such a good job at hiding the difficulties from close friends how will the general public understand conditions they have no experience of?

Are we keeping hidden disabilities too well hidden? 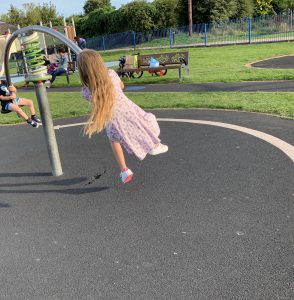